‘The timeframe is tight, very tight actually,’ says the European Medicines Agency’s Executive Director Professor Guido Rasi in a telephone interview from its current offices in London’s Canary Wharf. ‘We first have to move to a temporary address at the beginning of 2019, while we wait for the completion of our new premises, purpose-built to our needs, in Amsterdam’s Zuidas by the end of the same year. It is our ambition – and that of our partners, the Dutch authorities and the City of Amsterdam, I am happy to say – to have this organisation operating there at full-speed again by June 2020. This is important for the benefit of public and animal health in the European Union, and essential for the continuity of this knowledge-based organisation.’

It is a much discussed side-effect of the upcoming Brexit: given that the UK chose to leave the EU by 2019, all UK-based EU-institutions must be relocated. EMA is a prestigious organisation, so it’s no surprise that 19 out of the 27 EU-member states were anxious to accommodate it. But after intensive deliberations and multiple ballots at the highest European political level, EMA’s new location became the Netherlands – and more specifically, Amsterdam. 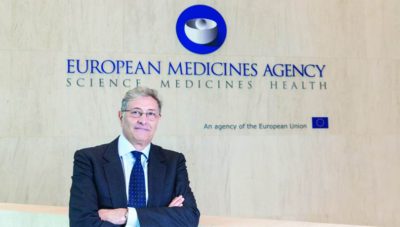 Professor Rasi shares his satisfaction on the outcome with many of his 900+ co-workers and their families. ‘In our first survey held among our employees, it was the favoured location. And according to our most recent poll, only 3% said no to moving to Amsterdam and 47% decided in favour of it. It is our challenge to pull the remaining half over the line, and the choice of Amsterdam helps with that. Amsterdam, plus its surrounding area, sort of sells itself – and that is an important feature for an organisation that depends on the (often irreplaceable) knowledge and expertise of its staff. So, although the numbers are not yet clear, we expect more of our co-workers (and their families) to join us than the initial estimates indicated. We’re aiming for 80% and are hoping for more. And the evidence supports this – there’s been a positive effect in the number of job applications that we’ve received since people have known that we’re moving to Amsterdam. More people than ever have applied for a job with us. One of the reasons is that they prefer to start their EMA career in an Amsterdam setting.’

This site uses functional cookies and external scripts to improve your experience.

NOTE: These settings will only apply to the browser and device you are currently using.